“… virtue cannot separate itself from reality without becoming a principle of evil.” (Albert Camus).

Who do you know who believes their virtue is absolutely right? Do you?

Everyone’s High Road is as individual they are, and every journey is uniquely personal. But all High Roads tend themselves to helping others achieve their own journeys, toward the end of achieving a state of grace.

If you talk to the animals, they will talk with you, and you will know each other. If you do not talk to them, you will not know them. And what you do not know, you will fear. What one fears, one destroys.

Do you listen to the animals, and to the language of the world?

The video is part of an excerpt from the graduation speech Neil Gaiman gave on the difficulties waiting in both failure and success to the students at Philadelphia’s University for the Arts.

It’s beautiful, it’s fantastic. Of course, it’s inspirational. How could the creater of ‘Coraline’ and ‘The Sandman’ be anything but?

Mostly, it’s about staying true to YOU.

Here is a link to the entire speech. It’s beautiful, and well worth the watch (http://youtu.be/ikAb-NYkseI). Happy Thursday 🙂

As you wish… the cast of the Princess Bride 25 years later.

Lady and Emma had a mutual agreement. Lady agreed to wear the apple sticker like a bindi on her sixth chakra, in exchange for the apple core as a special treat. 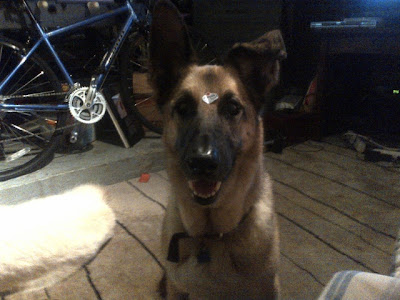 A bindi is a decorative dot worn in the area between the eyebrows, the sixth chakra known as the ‘agna’ (command) chakra – the seat of concealed wisdom. The sixth chakra is the centre point wherein all experience is gathered in total concentration. It is the central point of the base of creation itself – symbolizing auspiciousness and good fortune.

Lady came to our home as a rescue, a dog previously without the benefit of positive human interaction, starved to the point where her pancreas no longer worked, and with lymphoma lurking in her nodes. She spent her first days watching the family interact, and made her own decisions about the pecking order, and who was top dog. Lady was contemplative when it came to new experiences, and in her own way, deeply wise. I think the bindi suits her.

This be your pirate personality test:  http://talklikeapirate.com/ppi.html

Yarr… to be findin’ about modern day bands ‘o pirates, check out ’tis wicked infographic from the Russian News and Information agency: